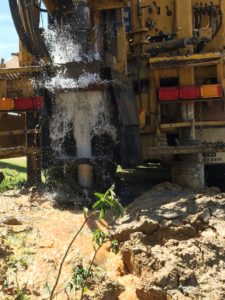 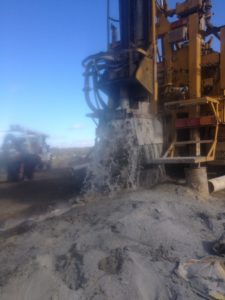 Water Bore Drilling Victoria. In the Victoria region there are generally two types of Water Bore Drilling  Victoria performed. “Air Rotary” and “Mud Rotary”. Air and Mud refer to the type of drilling “fluid” we use to help penetrate into the ground. Centre State Drilling use predominantly the Air Rotary method as most of our drilling conditions are hard to very hard rock. Geological formations vary from Sandstones, slate, shale, mudstone, to Basalt, Granite, and Limestones. These formations can be very hard and “massive” deposits.

Mud Rotary Drilling is more suited to formations such as sand and gravel and other “unconsolidated” geological formations. Mud is circulated down the drill stem to cool the cutting bit, flush cuttings from the hole but also importantly, to stabilise the hole and prevent collapse.

Air Rotary Drilling uses high pressure compressed air rather than mud. It is used to power a down hole “hammer”, much like a Jackhammer. The hammer has a tungsten Carbide “bit” which is rotated and at the same time a “hammering” action is achieved by the activation of an air powered piston inside the hammer. This piston hits around 300 times per minute (or more) and allows the drill stem to penetrate thru the hardest formations.  As the hammer advances, high pressure air is blown out the end of the bit which lifts the cuttings and flush’s then out the top of the hole. When water is encountered, its generally noticed immediately as it will be lifted out of the hole with the cuttings.

Water in hard rock generally flows thru “fractures” in the rock. Areas of rock that have been broken by geolocial forces, opening up “pathways” thru which water can move….generally referred to as “Aquifers”. These aquifers can sometimes be interconnected and can be quite vast, being kilometres or even hundreds of kilometres long or wide.

Once the optimum depth and flow rate has been achieved, the drill string (drill rods and hammer/bit) are removed from the bore and high quality bore casing is installed to the full depth of the hole. Appropriate seals and “packers” are put in place above the aquifer to prevent any contamination or sediment intrusion. There is a cement seal installed around the top of the bore, to a certain depth, to prevent any surface contamination or surface water from moving into the bore. The bore is then developed, or cleaned of all slurry or detritus to maximise the yield and quality of the bore. A flow test is performed to determine the yield of the bore so a pump can be matched to the flow of the bore. The bore is then capped and is at that point, ready for a pump to be installed.

Water Bore Drilling Victoria has its challenges with varying geological conditions, however by utilising best work practises, only the best quality bore casing and being diligent in the drilling design and construction phase, the client will be left with a clean reliable water supply that will be able to be utilised for many generations into the future. There is a lot more to constructing a water bore than simply smashing a hole in the ground and dropping some pipe down there, as most of the “cheap” “contractors” do. Different geological conditions require different strategies to maximise the flow rate and also, quite importantly, to make sure your water is clean. There are many horror stories of cheap work that results in dirty sediment carrying water that continually block the bore the pump and the irrigation system, not to mention the house plumbing!

Water Bore development is a crucial element of construction if one is to achieve maximum flow rates and very importantly, clean water. During the drilling process, as the rock is broken down by the drill bit/hammer, there is a lot of dust, fine and coarse particles of rock created. This is being pushed up the hole by high pressure air where it exits at the surface to accumulate. Whilst the hole is dry, the drill cuttings exit the hole quickly and efficiently, however when we start to encounter water, all that dust and cuttings very quickly turn to mud…..similar to what happens when baking a cake when we add liquid to flour, initially it gets very thick and lumpy and sticks to everything. The drilling process is similar. That mud and detritus builds up in the hole and is quite often pushed back into the aquifer, in many cases blocking or sealing it off. Much of it also remains on the walls of the hole, building up in a thick layer. This is why the “development” phase of the drilling process is so important. If the hole is not cleaned properly before and especially AFTER the bore casing is installed, then your bore will not produce to its full potential as the aquifer remains blocked by drilling slurry. The bore will only pump dirty water thick like “custard” and this will rapidly destroy or at the very least drastically reduce the life of your bore pump.

So it is essential to properly develop a bore after drilling and casing it. This is done by “airlifting” the bore. An air line is powered into the bore (generally the drill rods) and enough air is pushed into the hole to lift the water out of the hole. This creates a low pressure in the bottom of the hole which drags all that mud slurry cuttings and detritus INTO the bore, where it is then lifted out by the air lift technique. This development phase is continued until the bore is producing clean clear water. It can take anywhere from minutes to hours….even days. Many “drilling contractors” do not develop their bores, quite simply because they do cheap work and dont wish to spend the time and fuel necessary to perform the process.

Pump installation companies constantly give us great feedback on the quality of our workmanship, commenting that our bores are always pumping clean water. They also give us feedback about the True depth of our bores. If we tell a client that their bore is 62 Mt’s deep then it IS 62Mts deep!!! Its surprising how many times we have heard from pump installers that a certain contractor told the client their bore was 102 Mts deep yet the pump would hit bottom of the hole at 94mts depth….in that case the driller had overcharged the client by 8mts for hole that was not drilled!! Unfortunately this seems to be common practise by some “cheap” drillers.

A good bore is one that pumps clean water consistently and remains a reliable ongoing water supply. It will add instant, not insignificant, value to your property almost immediately and it will vastly improve your lifestyle and the living conditions of not only yourself, but also your animals and livestock.

Testimonial….”I highly recommend Danny !
Professional Service, quality Australian made products. A fantastic result, we now have plenty of clean water to keep our garden green and healthy!
Thanks again Dan”